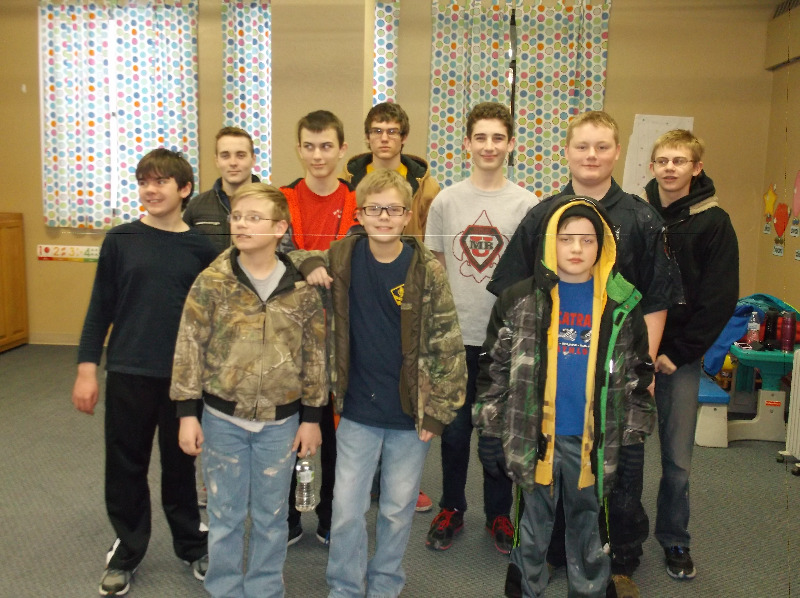 The Willard Community Center basement hallway was a beehive of activity on Saturday morning, February 28th.  Twelve Boy Scouts from Troop 55 along with 10 additional volunteers ascended upon Willard armed with paint rollers, drop cloths, paint and ladders to help Jacob Patrick complete his Eagle Scout Project to paint the basement hallway.  Jacob had led his Troop on two previous Monday nights during their regular meeting times to patch and prepare the walls so Saturday morning was “go time” for the painting project.  Jacob assembled his crew, assigned duties to every Scout and managed to keep his crew on task in a very small and congested area.

“We are very proud of Jacob for working so hard on his Eagle Scout Project,” said Jacob’s parents, Tiffany and Shannon Patrick.  “We are glad that he can help Willard out because they do a great service to the community.”  The Patrick’s older son, Mike Hoppe, completed his Eagle Scout Project at Willard in October 2013.

Jacob and his parents had met with Janelle Soderling, Executive Director of Willard to try to determine what needed to be done at the Center.  When Soderling showed them the basement hallway and all the different colors of paint and the patch work that needed to be done Jacob decided that this was a job that needed doing.  When asked why he wanted to do to his Eagle Scout Project at Willard Jacob said, “What I have done today will help keep Willard an enjoyable place for the community.”  Soderling was very impressed with Jacob, Troop 55 and the parent and volunteer support for this project. “Everyone came in and got right to work.   While they waited for the paint to dry for the second coat the boys went outside and scooped snow, cleaned the toys in the preschool room and kept asking what else they could do! It is very obvious that this group of boys have been together for a long time.  They worked well together and were eager to help Jacob accomplish his project” exclaimed Soderling.

Jacob has some words of wisdom for other Boy Scouts working toward their Eagle Scout, “Don’t let the paperwork overwhelm you.  Take it in steps and you’ll get through it.”    When asked why he wanted to earn his Eagle Scout Rank, Jacob is sure that it will help him in the job field because it is an inspiring self-achievement.

The Willard Community Center wants to thank Jacob Patrick, Troop 55 and everyone that volunteered to paint the basement hallway. “It was heartwarming to see so many people so enthusiastic about helping to improve Willard.  This group of boys are truly making Willard a great place to be!” stated Soderling.